A 73-year-old Eglinton man and his daughter are recovering at home after she donated a kidney to him.

Robert Smyth, who had renal illness for 40 years, was given one of Iilona Neilson's kidneys two weeks ago.

"My doctor said my kidney was working so well it's probably better than hers," he said.

Mrs Neilson is also doing well, and she said the operation had brought them even closer together.

Iilona Neilson and her father, Robert Smyth, are recovering

after she donated a kidney to him 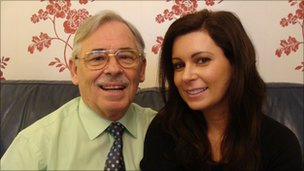